Tripod is an inseparable element of photography. It brings an added value and gives more options of taking photos. It allows the use of long or even very

long exposure – impossible to do without a tripod. Other techniques that may be applied include HDR or multiple exposure where several shots are put together and often you need exactly same frames with different parameters of exposure. Tripod allows the use of longer focal length, where without a support of a tripod you have no chance of taking photos that are not blurred. Tripod ensures better stability.
Also, you can use a tripod for panoramic photos, to make time lapses, etc. Even with short exposure seemingly possible to do with no support after comparing such photos with photos taken in identical conditions, but with the use of a tripod, the latter will turn out to be of much better quality.
Every tripod has, however, some downsides, namely its weight, size and the fact that you have to carry it around.
The old rule says that the heavier the tripod the better for photography, but not so good for carrying. You hit the nail on the head when you find a golden mean or….
Or you can use advanced technologies applied for many years in Formula 1 or aviation. Namely, you can get a carbon fibre tripod.
When I gathered equipment for my last trip to the Himalayas, the main requirement was lightweight and stable tripod.
My choice was

made available to me through the courtesy of Delta (FotoTip).

It is compact, lightweight, with the head weighing 800 gram (!!!!) while my usual choice, Manfrotto, weighs with the head is more than 4 kg. Because I had with me the whole 4/3 micro system, carrying around a 4-kilo tripod would be rather much.
On the other hand, 800-gram tripod is almost unnoticeable. It weighs less than my Zuiko 50-200 lens which is in my bag basically all the time.
After a month with this tripod, I can say that I love it.
It is really solid. Extremely light as already mentioned. Its legs may be spread really wide, so the central column starts just above the ground – a great solution, as stability of the tripod is then amazing.
When the legs are spread at the maximum angle, it looks like this: 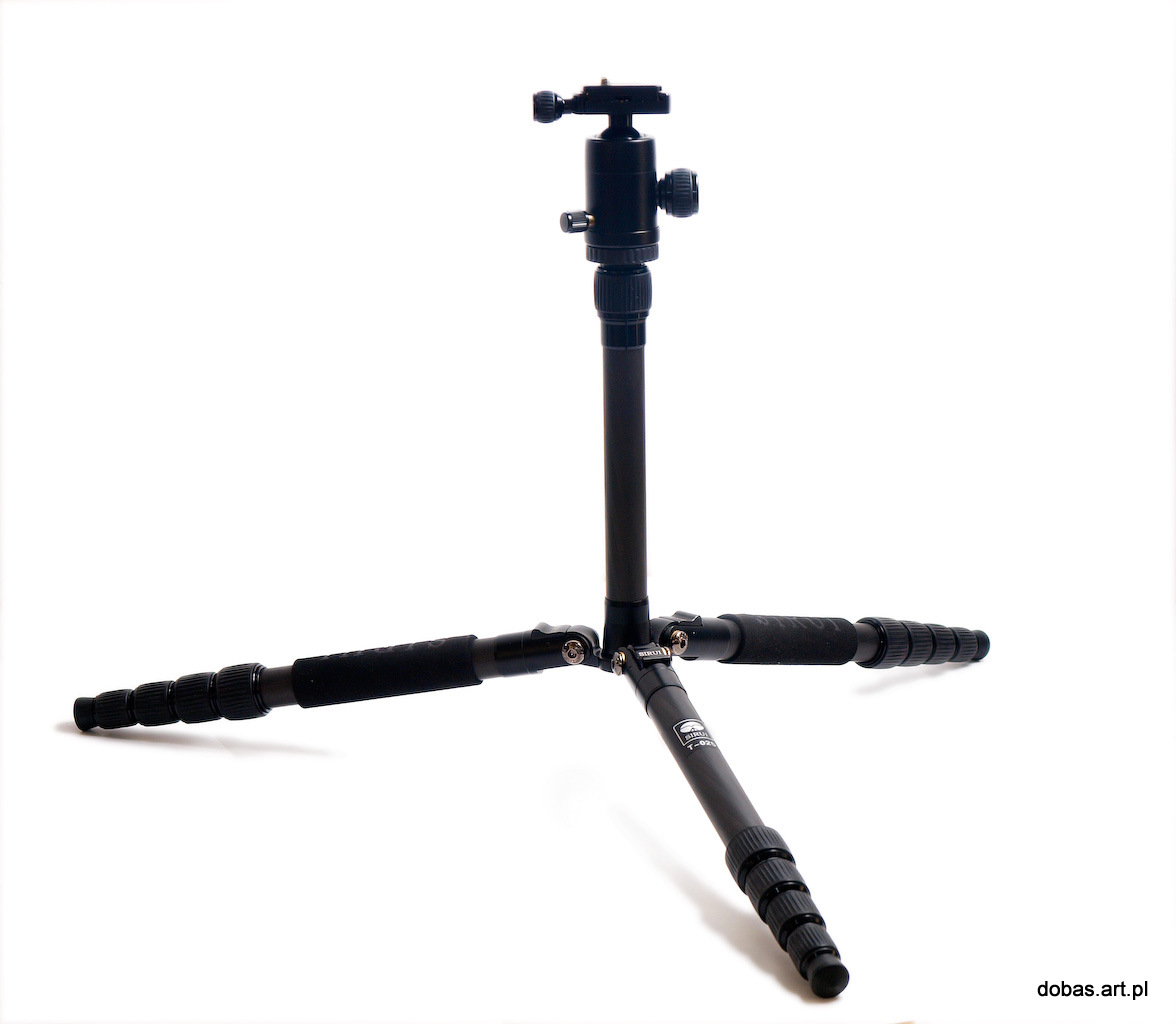 Always, when I look at such type of picture the tripod seems awkward, very high and the central column looks extremely extended. It is however a false impression. Below, the same photo with the lengths given:
As you can see, from the place where the head is fixed the distance to the ground is 28 cm, and to the camera fastening, about 36 cm.
It is not high, not unstable, and certainly not awkward.
Thanks to the blocking system on the hinges of the tripod legs, the legs may be set at different angles – starting from very wide, through intermediate positions, to a very sharp angle, as shown below. The blocking system of the tripod legs is very simple and solid. I really like such solutions – the simpler the better, as less can go wrong with it. The blocking system is reliable and strong. 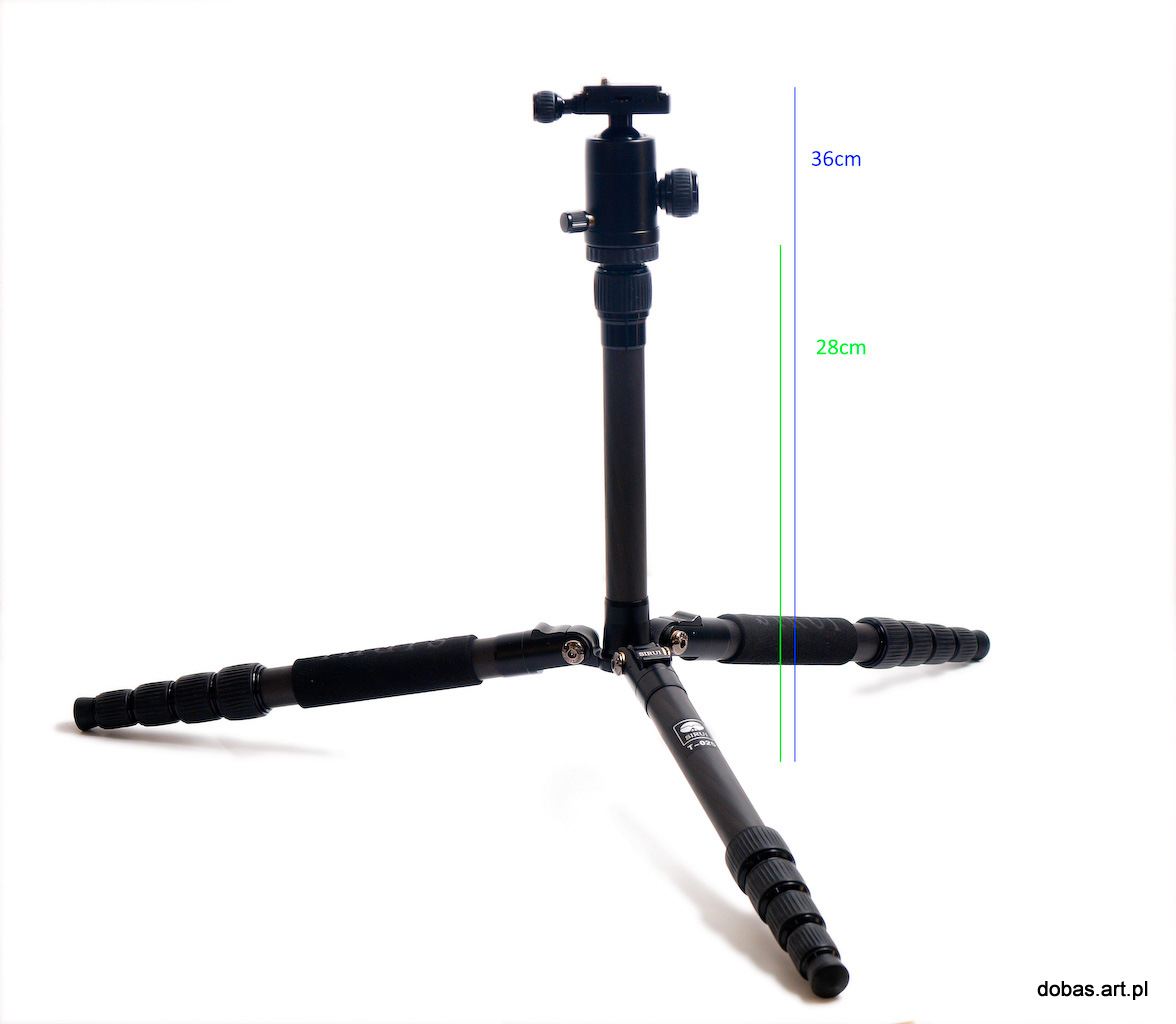 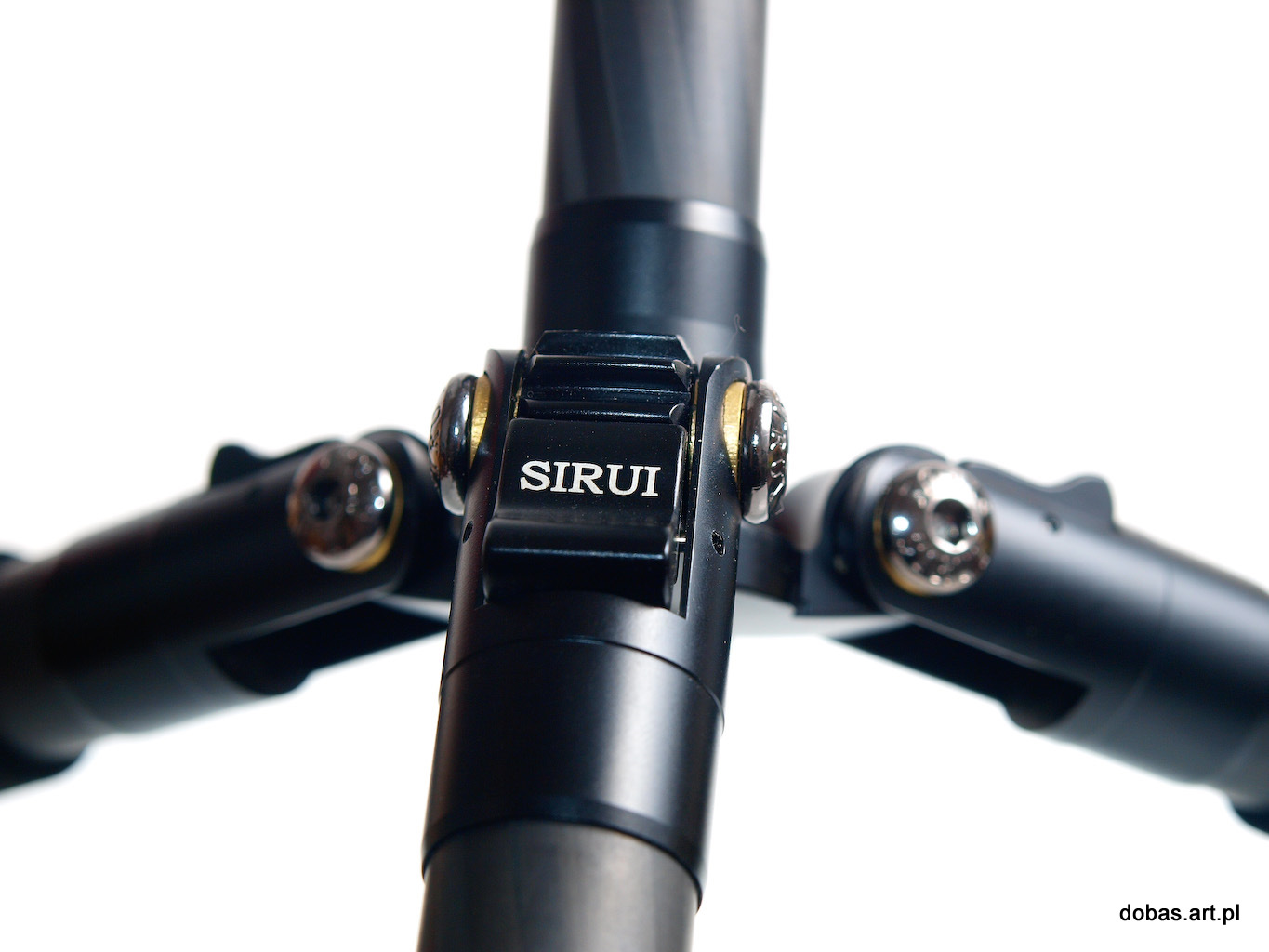 The legs may be set as shown below: 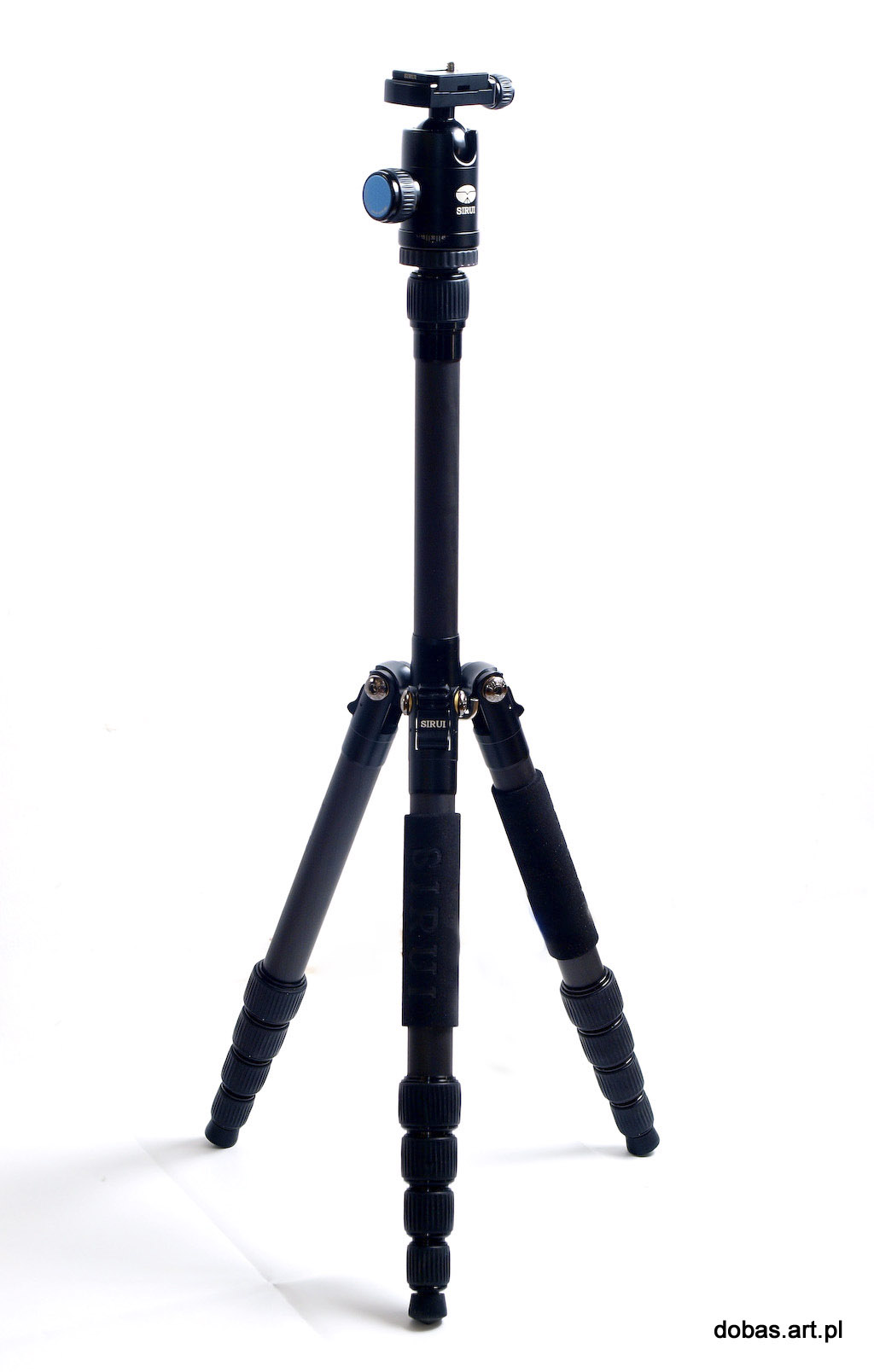 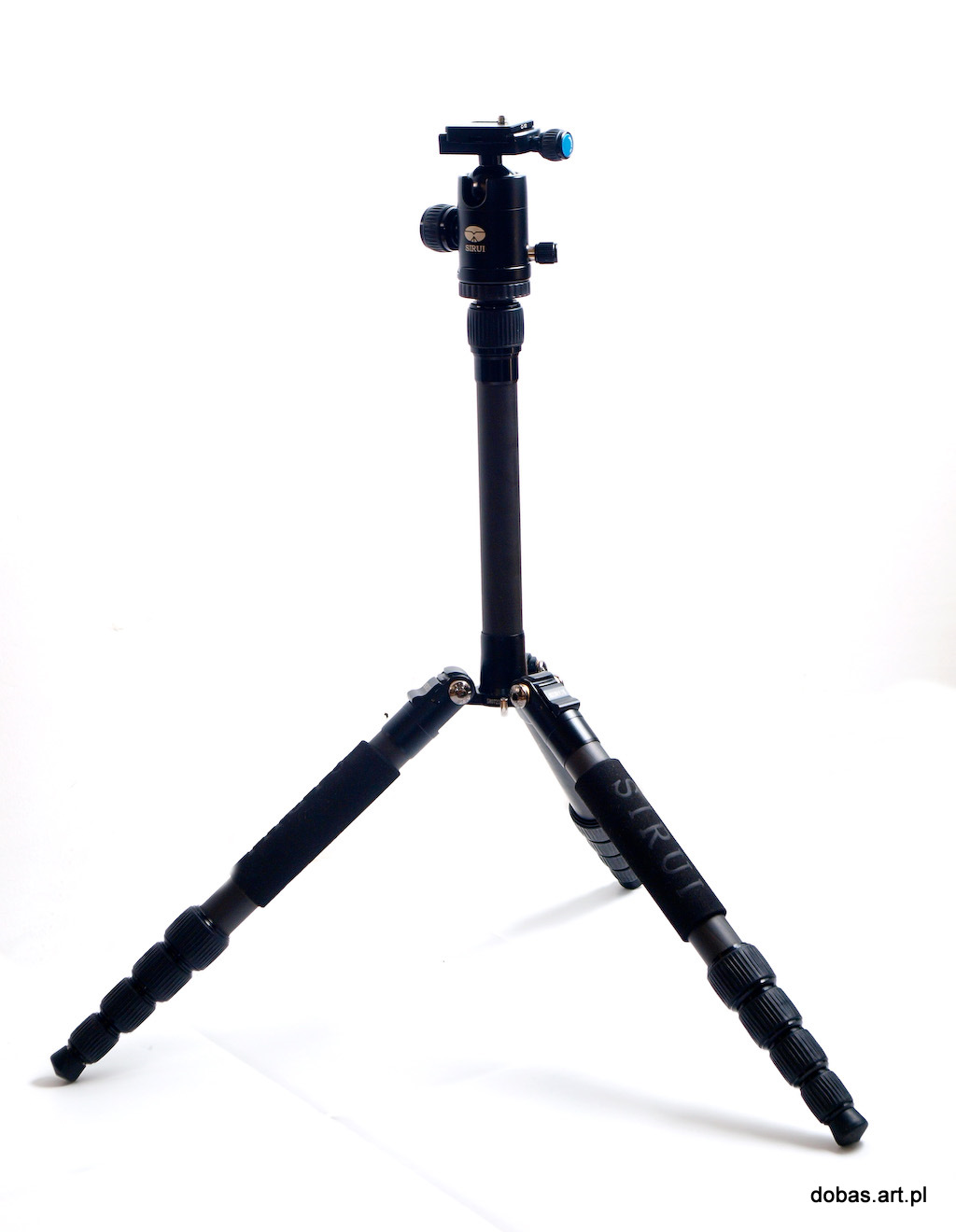 The way the tripod is folded is also an excellent solution. The tripod legs turn by 180 degrees, so when they are folded they are parallel to the central column. Such solution makes this tripod extremely small after folding. It is so little that it can be easily carried attached to a belt and it does not restrain your movements. In its folded form, this tripod is extremely small and lightweight, its length is about 30 cm, and after unfolding it becomes a proper tripod: 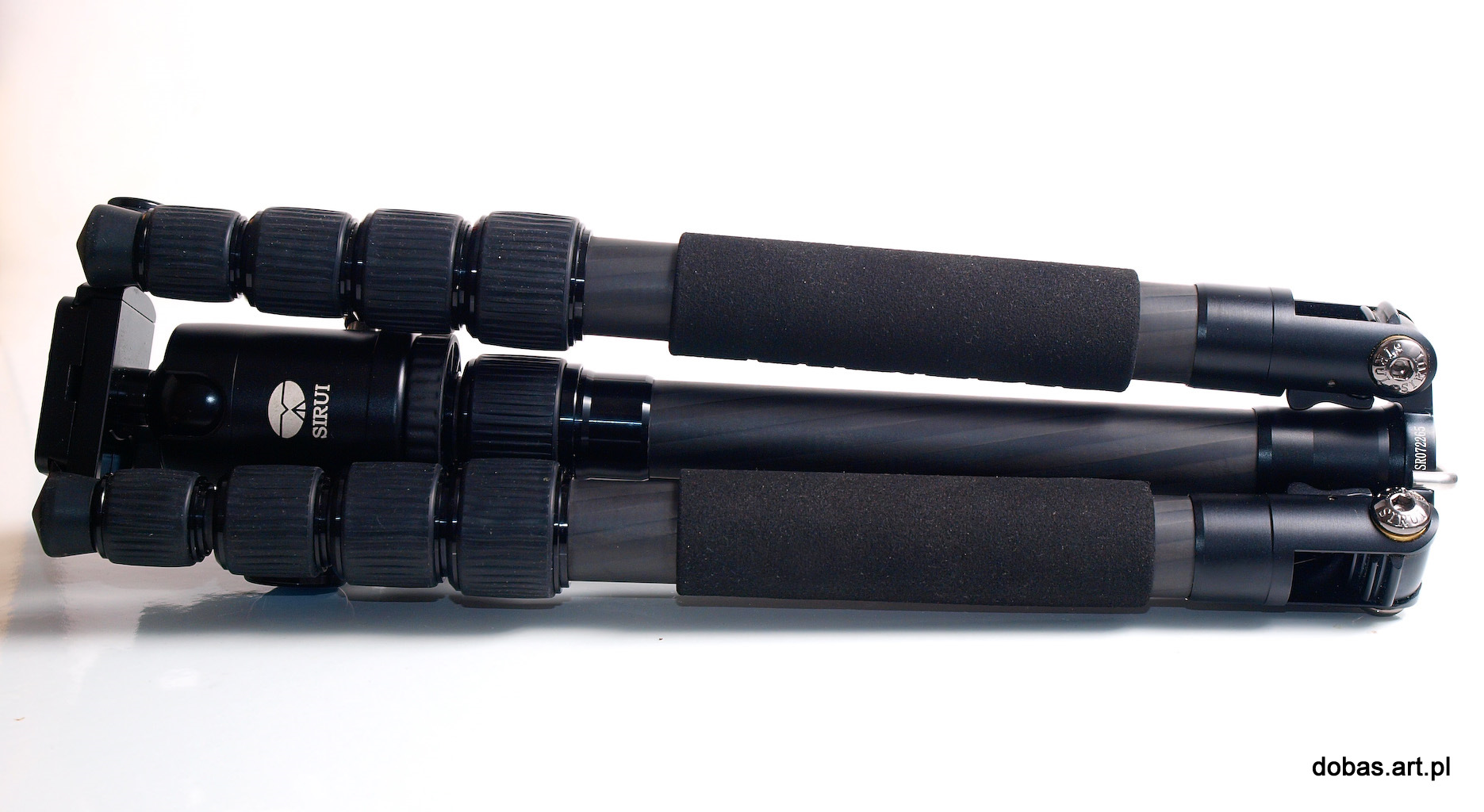 I’ve heard some criticism of such method of folding a tripod, and I was sceptical for a while, but after using it for a short time I think it is a really good, innovative solution. The fact that this tripod uses different techniques from what we might be used to should be seen as a virtue, not a fault. It is an innovation enabling folding a piece of equipment from 140 cm to a package about 30 cm in length.
As to the dimensions significant for the owner of the tripod, it looks as follows:
length of the column is adjustable from 20 to 40 cm
legs are adjustable from 30 to 100 cm
The whole tripod with minimum leg extension and maximally wide angle has 28 cm from the ground to the end of the tripod, and 36 cm including the head.
Maximally extended legs and acute angle gives you 128 cm without the head, and 137 cm with the head. It was certainly sufficient for all my needs.
Blocking the legs with knobs is also a good solution. They are easy to use, nice to touch and solid rubber knobs. Loosening them allows you to extend the legs or the central column, and tightening blocks the elements. 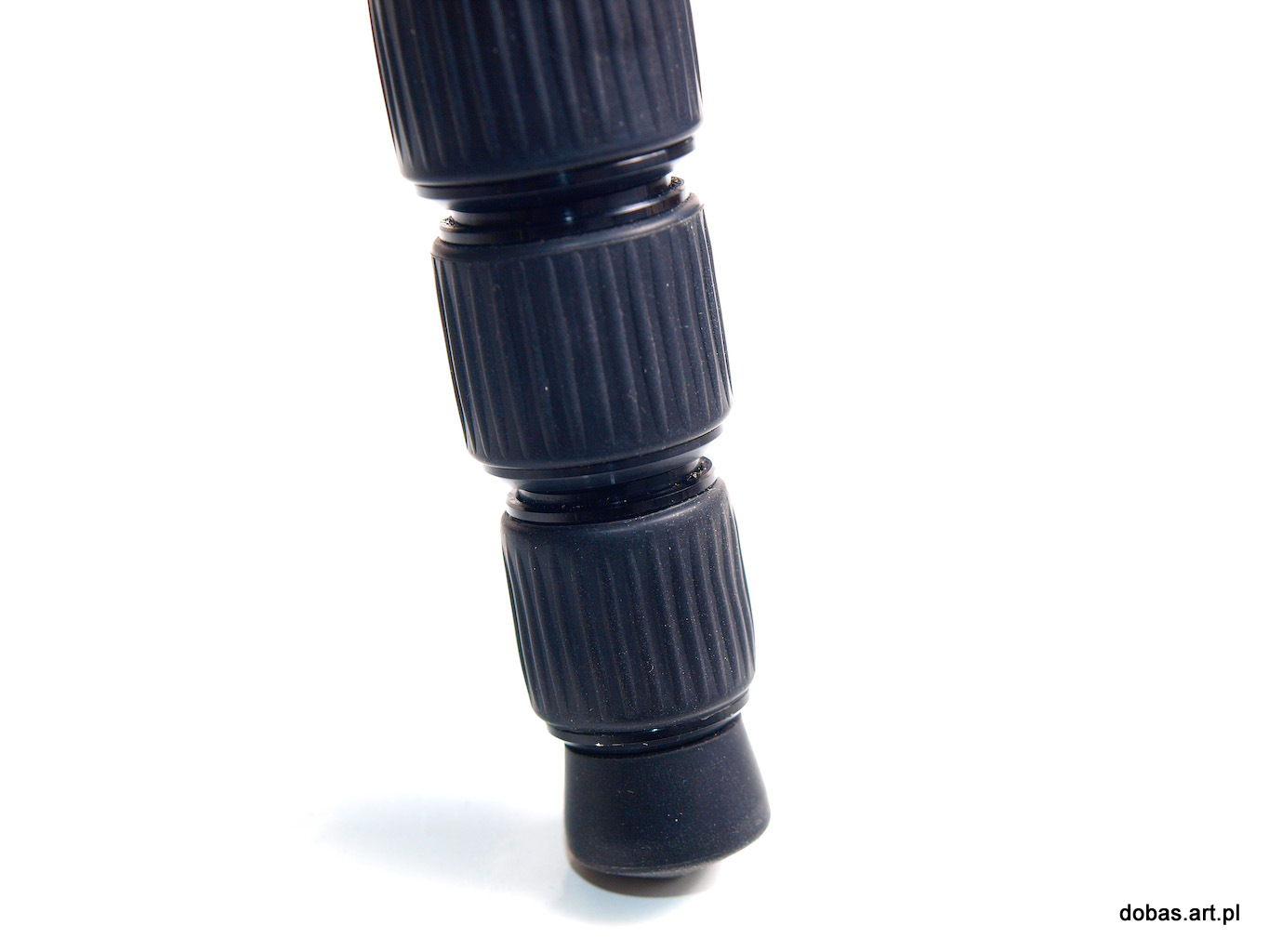 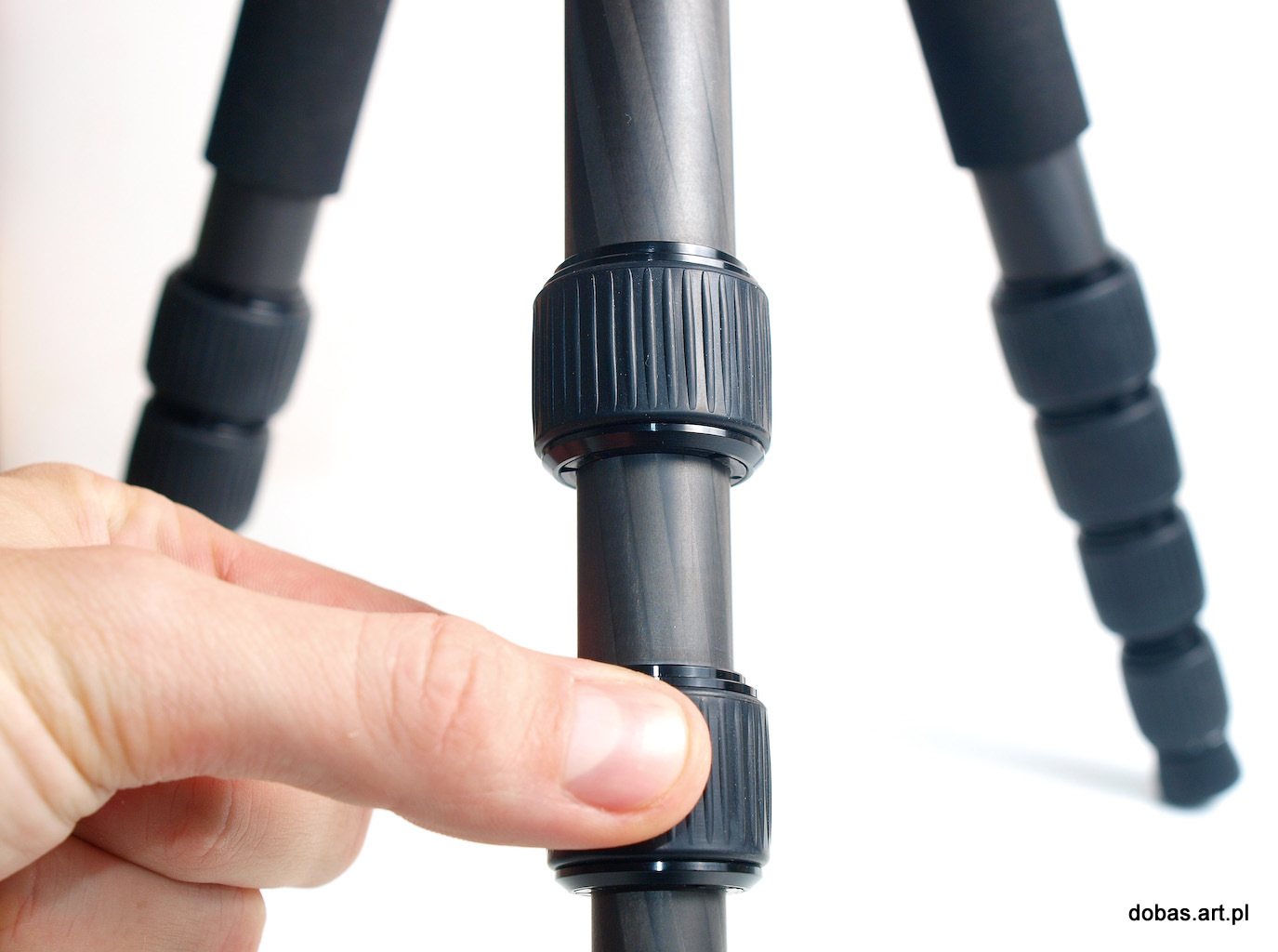 Additionally, under the tripod there is a hook on a spring. A very useful feature as you can always hang something heavy (a rucksack) and add ballast to the tripod – it can come in handy in strong wind conditions, I used it several times when the wind was picking up. 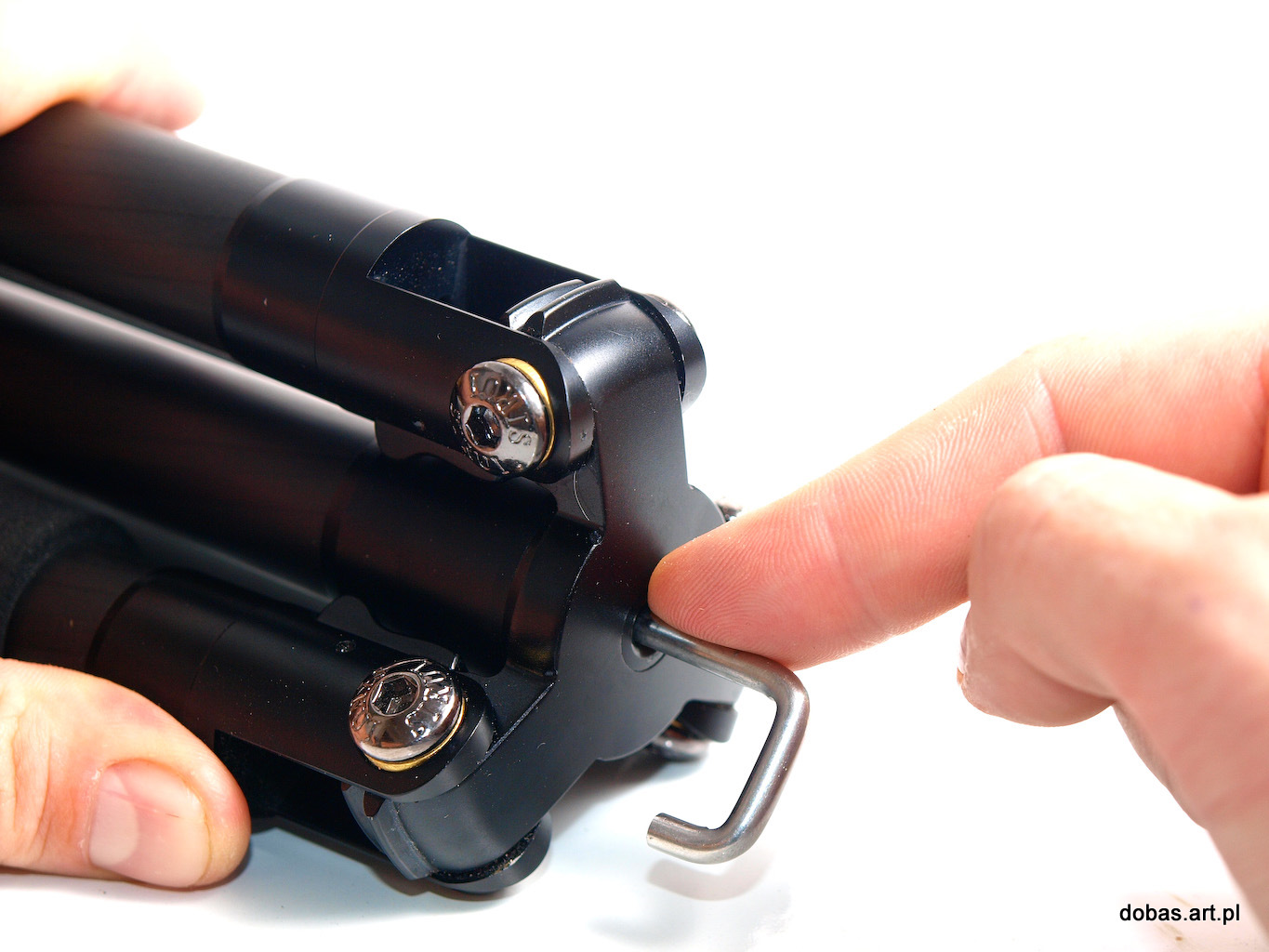 Using the tripod in very low temperature is also quite pleasant. Touching elements made of carbon fibre is not as bad as touching metal. Apart from that, the legs have foam pads, so even at night with really low temperatures I was able to use the tripod without gloves. This would be unthinkable with fully metal tripod, when your hands go numb after a short while, and if your hands are slightly damp they might even freeze to the metal. With this tripod, you’ll have no such problem.

Now a few words about the column and the head
Extending and blocking the column is solved in the same way as with the legs. As I said before, it is an easy, reliable solution, and the knob does not look like cheap plastic, but really solid element. I am convinced of it after a month of very intense use of this equipment day after day, during trekking in the Himalayas, quite demanding trip in rather unfavourable conditions for the equipment (temperatures ranging from +3- to -10°C, rain, dust, etc.), I had no problems in using this solution. 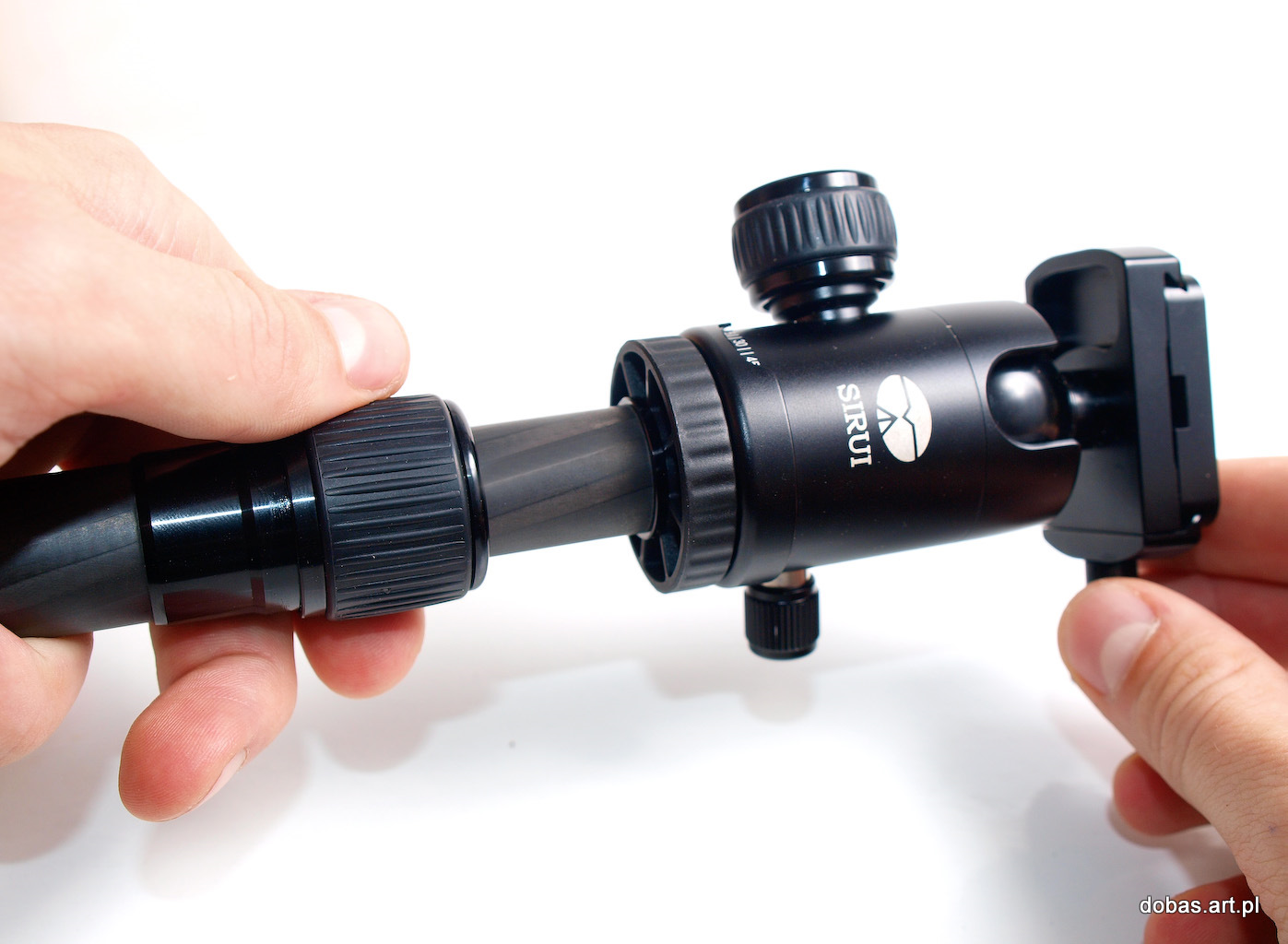 The column ends with a round ‘plate’ made of plastic, and a 3/8 inch stainless steel thread. It is a standard size used in photography, in particular in spots where a head is fixed to the tripod legs. Another standard is 1/4 inch, and this thread is used in such places as camera body. Thus, normally fixing a camera directly to a tripod is not possible (thread bigger than 3/8 inch). Here, the SIRUI tripod comes as another surprise. The thread may be easily changed from the bigger one to the smaller one, as the manufacturer equipped the tripod with a double thread, making the tripod very flexible. A change from 3/8 to 1/4 takes only seconds: 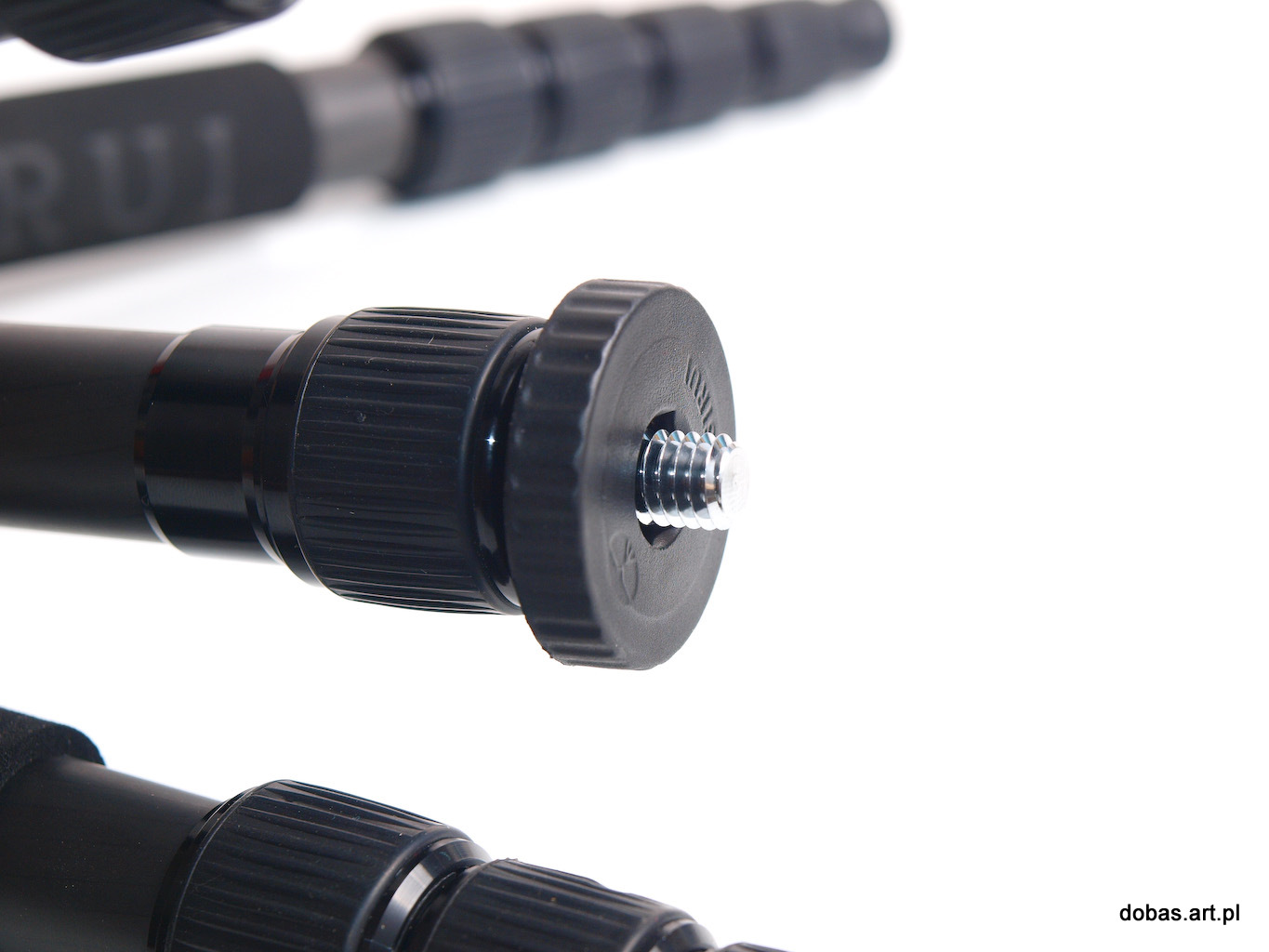 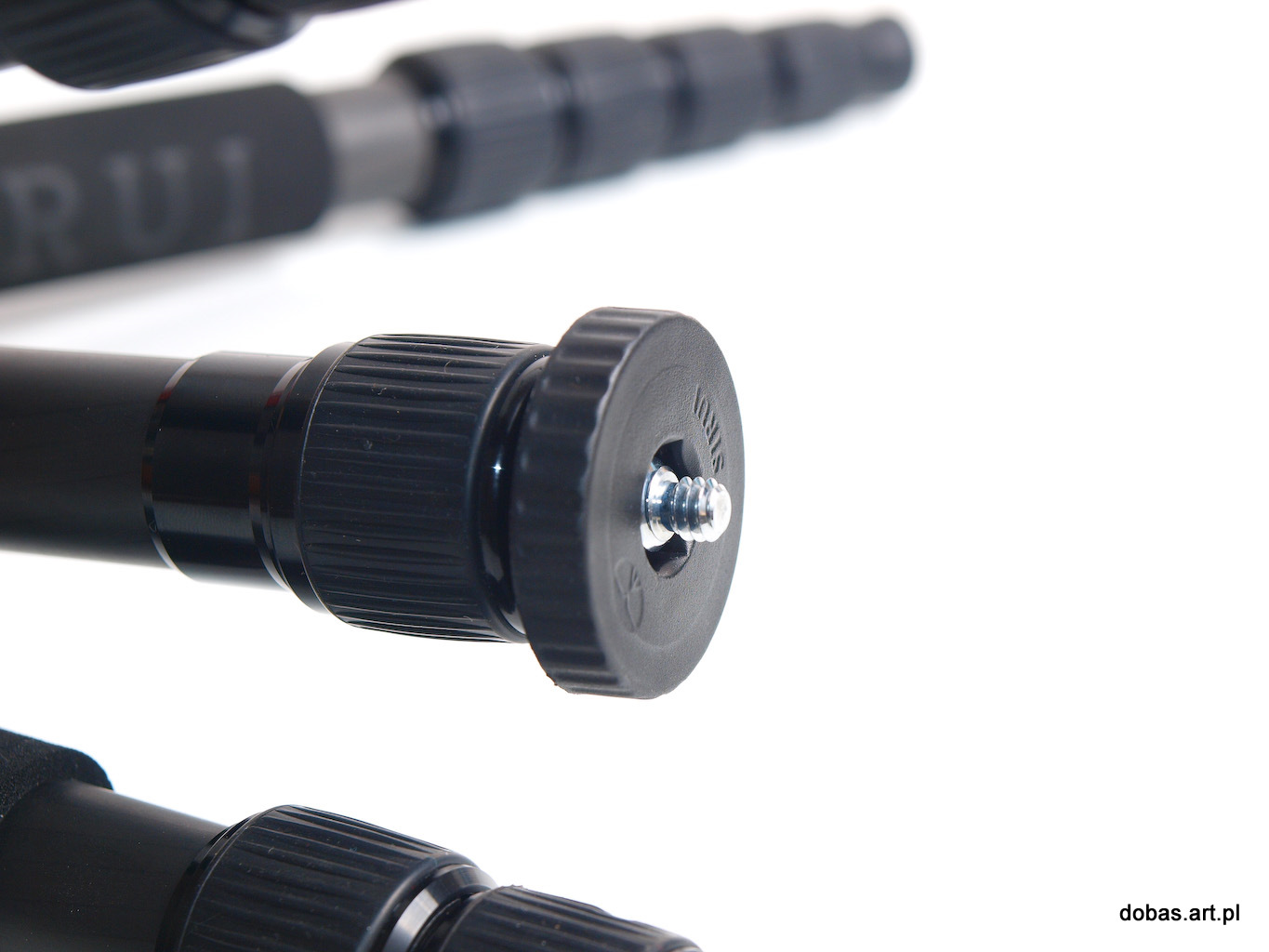 First you loosen the plate, then you take out a screw with thread on two sides, one with bigger and one with thinner thread.
The C-10 head is also good quality. When you hold it in your hands, you can feel it is reliable, solid, and well thought through.
The first thing worth mentioning is the fact that the head is equipped with two independent knobs. It is a basic functionality, because when you want to use the head to make panoramas, on the one hand you need to have the camera blocked in a desirable position, and on the other you have to be able to turn it around a vertical axis. Two independent knobs make this possible. As can be seen on the photograph, the knobs on the head also have a rubber layer. After a month of intense use, the rubber is still in a perfect condition and still has good grip. 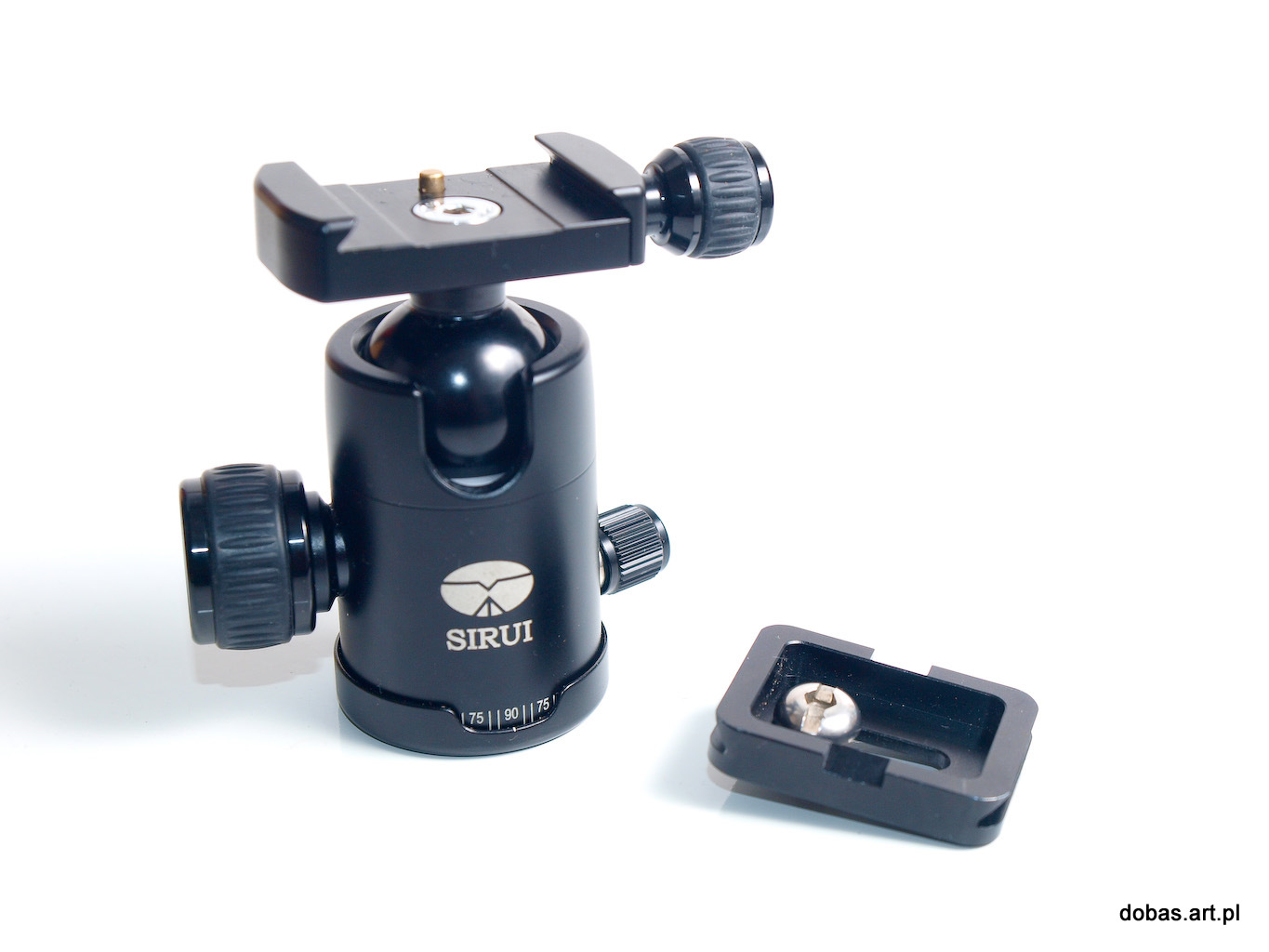 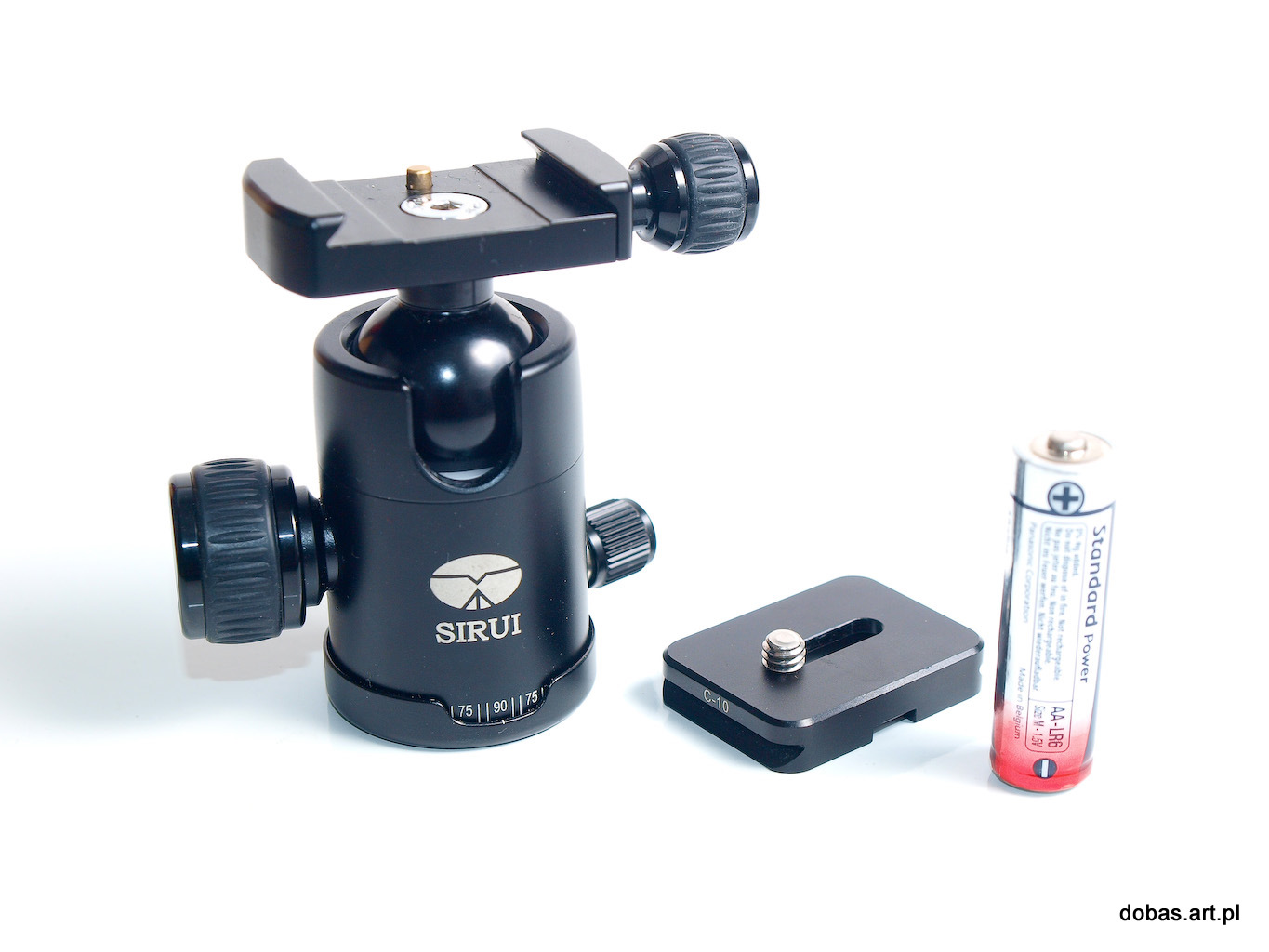 The whole system is really tiny, to give you an idea – a photo next with an AA battery.
The times when MADE IN CHINA was a synonym of shoddy are long gone. China is the number one economy, and sends all over the world huge numbers of high quality products at prices much lower than the price of brands with established position in the market and well known among the consumers. In terms of quality, however, the gap between those products is insignificant. With my E system I use Manfrotto tripod, I also had Gitzo, but faced with a choice, I would go for much cheaper alternative, solidly made and offering exactly the same features. I would use the money saved on a photography trip.
To sum up, the tripod is an excellent solution for photographers who want reliable lightweight equipment. It is excellent value for money, when you compare analogous tripods manufactured by brands known in Europe for years. For mirrorless interchangeable-lenscameras, at the moment I would not use any other tripod.
It is a little different in case of DSLRs – although PEN with ZD 50-200 works well with this tripod, very heavy camera with large lens would be too much for it. I used it to support a camera weighing around 1500 grams (E3 + 14-54) 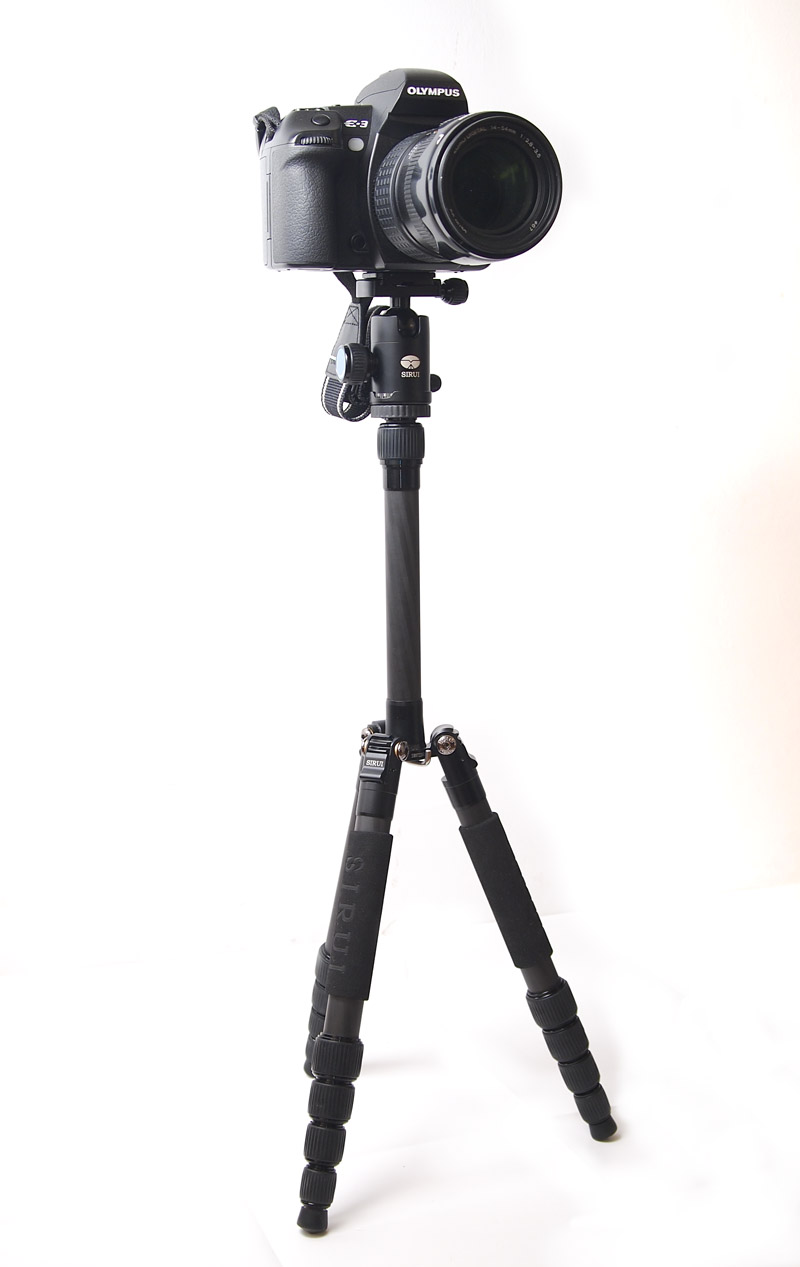 However, you have to remember that with large body DSLR you would add to it a long focal length lens. And although large DSLR with ‘standard’ lens will work well with this tripod, the same camera with a large lens will not. In my opinion, this tripod is ideal for mirrorless interchangeable-lenscameras and small DSLRs, like E410, and not for giants like E3 or E5. With all that said, I had hard time finding any flaws in this tripod.