I had a pleasure of testing this lens for almost a month, during my last trip to the Himalayas in Nepal. Making a decision to take a fisheye, 7.5 mm with u4/3, I had doubts that I made a right choice.
Introduction.
In general, fisheye lenses are interesting, although they have to be used in moderation. Presentations where 60% of shots are taken with a fisheye are rather hard to watch. More so, in my bag next to the fisheye I had ZD 9-18, a lens which I really like for its parameters and wide angle.
Luckily, Samyang 7.5 is not very heavy. The lens with caps is about 200 gram, more or less like two bars of chocolate.
Many respectable photographers say that it is better to have one more lens with you than later regret that you can’t do something. As it turned out, I did not regret my decision, and even can say that some shots would not be possible without this lens.
On the other hand, many experienced photographers say that taking too much equipment is unnecessary, as you cannot become a porter. If it turns out that your ability to take photos is limited due to gigantic weight of your bag, carrying so much equipment is pointless.
Small weight of this lens, however, makes it easy to throw it in a bag.


The lens is really quite solid. At the first sight and touch, I was sure that the whole lens is made of metal – like old, trusted lenses for analogous cameras.
After a while it appears that the rings and the sun protector are made of plastic, however, its quality is sufficient to make this lens a solid product.
The lens is really small – typical lens for u4/3, however you have to remember about the angle of this lens while taking photos. Its small size makes it easy to include fingers of the photographer in the shot. Many times I forgot about it setting the focus, and my fingers ended up in the shot… After a while, of course, I got used to the size of the lens and watched where my fingers were.

There are two rings on the body, one for distance setting, and one for the aperture. The focus ring has a really nice resistance to it, and enables regulation from 9 cm to infinity. The aperture ring is adjustable by 1/2 EV between f3.5 and f22. Between them, there is a red metal ring. The whole thing is really decent and solid. The only thing I missed from analogous lenses was a scale showing on the ring the distances of the depth of field at a particular aperture setting. It is, however, only an insignificant detail. 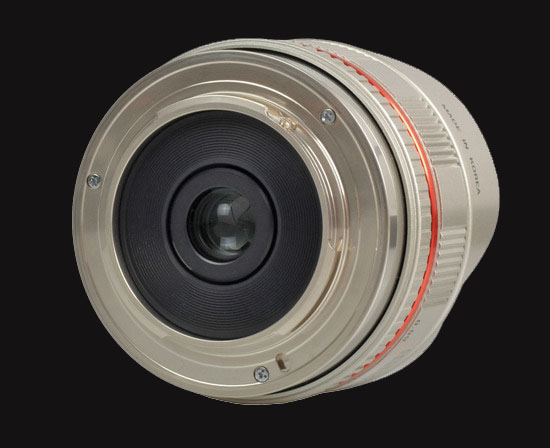 The lens on the side of the mount also looks good. The mount is made of metal. The fact that the sun protector slightly wears off from repeated putting on and taking off the cap, may be treated as a weak point. However, for a photographer, it should not be important. From the point of view of aesthetics it could bother some people or slightly decrease the value of the lens if it was to be sold, but from the point of view of its application it does not matter. The equipment is for taking photos, and not looking at it. 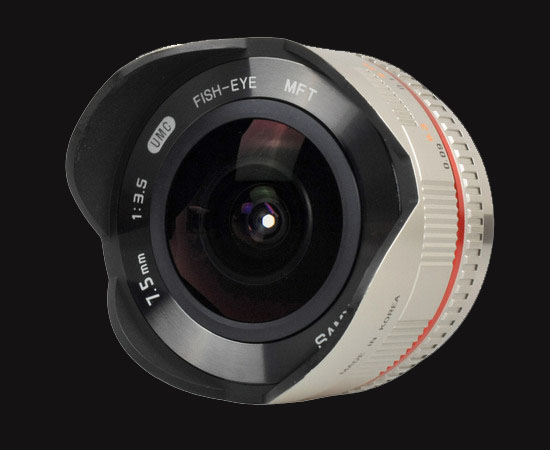 The front lens is slightly convex, but it is secure thanks to the protector in the form of four leaves surrounding the lens. A filter cannot be fitted on the lens, as it is not equipped with a thread. It is normal with this focal length, as vignetting would be horrible with most additions due to the angle of view of this lens.
Showtime.

It took some time for me to get used to this lens. First, I had a problem with my fingers constantly getting in the shot; then due to my absent-mindedness it turned out that I was taking photos with stabilization enabled which resulted is photos not as sharp as they could have been. After a short while, however, the lens was under control.
As I said before, a fisheye in my opinion is a lens which may be used from time to time to break the monotony of the shots with normal rectilinear lenses.
This is caused by characteristic distortion of everything by this type of lens.
Another reason for a fisheye lens to be always in my bag is creating spherical panoramas. With this lens, 360×180 panoramas are much easier to do than with narrower angles. With less individual photos, the chance of getting something wrong is lower, no matter if it would be caused by your mistake or, for example, a change of light. Taking a small number of photos takes less time, so you have a good chance to finish a panorama before the light changes. Additionally, minimising the number of shots saves time at the stage of processing.
Spherical panorama made with Samyang 7.5 f3.5 lens
Panoramas made with this lens and PEN, Samyang 7.5 MFT and Dobas-01 head for panoramas, gave surprisingly good effects. The quality of panoramas was comparable to those taken with Olympus E3 and ZD 8mm lens. The weight of the equipment used was on the other hand much different – I could clearly feel it claiming moraines on the glaciers above 4000 m. I can honestly recommend this set as lightweight equipment with large capabilities for spherical panoramas. Placing the thread in the PEN caused some difficulty, but I can tell you about it some other time.
Samyang surprised me in many different aspects.
I have the impression that the degree of distortion is lower than in case of other fisheye type lenses I had used before. For me it is a huge virtue, as it makes this lens much more universal than most ordinary fisheyes. What is more, in case of every fisheye, when the camera is places horizontally, with the horizon exactly in the middle of the shot – distortions caused by the lens will be minimal. In case of this Samyang, photos are just ultra-wide shots. 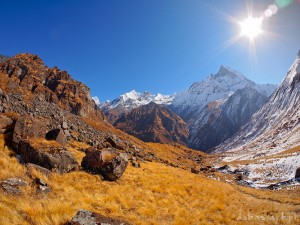 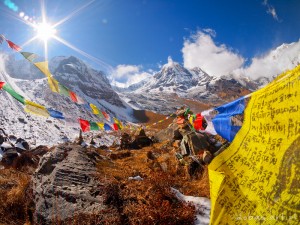 Another thing which made me love this lens is its work against the light. I could include the sun (not covered at all) in the shot. The effect was amazing and made me use this lens for wide-angle landscape shots with the sun in the frame. 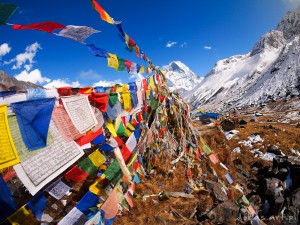 Focus of this lens is excellent. Chromatic aberration is also insignificant.
Obviously, this lens does not have autofocus. This is not, however, a problem when you can get the depth of field from a few cm to infinity.
Summary.
Fisheye type lens is very specific. People often buy one, use it for a short time, and sell it bored with the barrel distortion. This happened to a lot of my friends. This Samyang, however, apart from the distortion characteristic for a fisheye lens, has many other applications. It is excellent as wide-angle lens which can be used successfully with landscape photography. 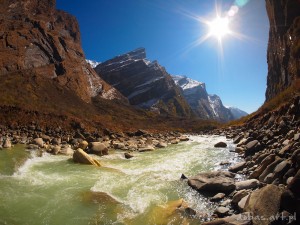 This lens is a solidly made piece of equipment with good functionalities, not limiting you to just distorted shots. Taking photos against the light with this wide-angle lens is addictive 🙂 Focus is very high, aberration very low – this is rather an exception among fisheye lenses. And if you want to create a panorama, this small lens will be excellent for making virtual tours. If you like wide-angle lenses you will not find a better one for this kind of money, so you should not hesitate. If you take into account the value for money factor, I would say that this is one of the best fisheyes I have ever used.